Our Client, and Author Sarah Klouth

When Sarah our beautiful, talented and very resourceful Author isnot writing, she is studying film making and screen writing full time and working as a freelance videographer part time.  She tells her that her passion lies in story-telling in all forms and her ambitions and ultimate goal is to not only become a published author, which she now is well on her way to becoming known as, but also to have one or more of those stories transformed into film, and which will happen and follow on as the natural course of her dedication and hard work devoted to the craft.

“The Rule Book” is Sarah’s third novel to date and is currently multi-tasking on two more works, (which are well on the way to becoming completed).  “The Rule Book” however  was the first creation which she felt comfortably confident about to seek the representation of an Agent for.

She confident to us that she had submitted it to Madeleine Buston of the Darley Anderson Agency in the UK, who took Sarah’s work to the next leve in a sense after applying some edits to the book.  Madeleine was then smitten with “The Rule Book” concept, but sadly (and as it can so often go where 2 parties are a little divided about an author’s work often not a reflection of the quality or uniqueness of a story line, (and which I have to add  is a common occurrence in today’s very competitive industry),  Madelaine didn’t gain the same support from Darley himself and so, had to pass. 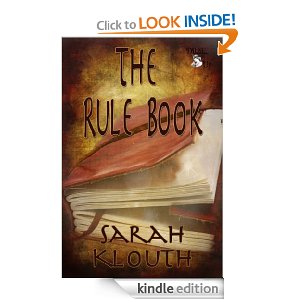 Available at Amazon.com in its Kindle edition and with a view to seeing the work in paperback format, in the not too distant future, this book offer a great read. We love the cover which exudes an ‘old world’ charm and ambience.

Sarah strove to create  “The Rule Book” to provide a rich mix between ‘The Da Vinci Code’ and the ‘National Treasure’ movies. There is something in this story for the thrill seekers, the romantics, or those looking to solve plots, or looking for the occasional laughter as a form of light relief.  This work sounds like a great ‘all rounder’, catering to a variety of tastes.   We think Sarah is on her way to becoming a much sought after author.

The Rule Book is rumoured to have been around since time began. This single binding is said to hold hundreds of rules that if followed properly, allow the reader to extend his or her life span. The single most important rule is that the recipient may not under any circumstance expose the book’s existence. It is clearly written that if this cardinal instruction is ever broken, the reader will instantly cease to exist.

In the early eighteen hundreds, an investigative journalist named Jonathan Priest uncovered the truth of the elusive Rule Book and believed the world had a right to learn the ways in which they too could extend their life spans. Regardless of the certain death the book had promised he would face, he had his story published for all to see. He died of supposed natural causes that very day.

In early 2008, a couple of established Hollywood producers researched the story of Jonathan Priest and The Rule Book and believed his mysterious death and the concept of The Rule Book would make a great film. After almost two years of hard work, the movie finally premiered. Once the credits rolled and the curtains shut, each and everyone who had worked on the film were dead.

After finding that her best friend—who had co-directed the film—had died quietly beside her at the London premiere, Charlotte Winter, a young and newly famous actress from Australia soon realises what she has to do and what she will ultimately have to sacrifice to reveal the truth behind this ancient cover up.
Details

My name is Jonathan Priest, and I have recently found myself in possession of something the likes of which the world has never seen—at least the majority of the world. I cannot disclose how this truth has fallen to me, but I write this to those of you who will be affected in the future.

For as far back as imaginable there has existed a book unlike any other: The Rule Book. This single binding has been handed from one person to another as selected by the book itself in an attempt to ensure these select few have the chance to do what they were born to do. For some this may be to invent a revolutionary product or system, for others it is to save lives through new medicine or other means. The book makes our rapid evolution possible. Some people are simply born great; they see above what others see and have the ability to create what many never deem possible. Without this book to guide them along their rightful path, however, they may not be able to succeed.

Inside this book are a series of rules the reader is encouraged to follow to ensure their full potential is reached. The rules change according to each reader’s destined plan and capacity for good. The book tells of what foods to avoid, what schools to attend, and many other seemingly minor suggestions that ultimately lead to a full life lived and a plethora of accomplishments achieved. It allows the selected to avoid any form of illness or any accidental tragedies. The particular version I was able to get my hands on informed the reader that he must enlist in the armed services, never smoke cigarettes, and ensure he stays away from horses among hundreds of other rules.

Some readers in the past have chosen not to follow these rules and were taken from our world too soon. Unfortunately, the book cannot account for the evil of man and cannot protect the readers from murder or any premeditated harm, regardless of whether they have been living their lives according to the rules or not.

The first and most important rule is that no recipient may ever tell another soul of the existence of The Rule Book or any of the rules it contains. If this vital rule is broken, the reader will instantly cease to exist. The book is a gift that each chosen one must cherish, obey, and keep hidden.

As the book has promised, I face certain death once this letter goes to press. My reasons for doing so are my own. I know that you will find truth in this once I am gone and hopefully, the next person to receive the book will not waste their chance at greatness.