Our Client, and Author Wayne Trebbin

We would like to introduce Dr Wayne Trebbin a certified physician in  internal medicine and nephrology.   http://www.facebook.com/wayne.trebbin

Wayne’s first novel ‘Bruja’ is an Adult Adult Fiction/Medical Horror Thriller, which grabs the attention at first instance, and makes for compelling reading.   The settings and location where the story line unfolds is based on Wayne’s personal experiences, whilst working in Africa in his capacity as a Medical Physician.  Wayne Trebbin and his team of associates, all physicians certified in internal medicine and nephrology provide  medical aid to the poor.   The author is also the founder of ‘WORTH’  (World Organization of Renal Therapies), (www.WORTHdialysis.com) a non-profit organization that places dialysis units in the third world and is dedicated to treating the poor, and in so doing he has spent extensive man-hours of his valuable time in the sub-Saharan Africa.

The author has also published a non-fiction work with more scientific overtones which was published in 2006, and is currently working on a sequel to his novel ‘Bruja’.  We include the Synopsis and a short author Biography, and find three Chapters as per your submissions guidelines requirements for your attention as per attachment.

The old woman, her visage hidden in the depths of her cowl, had been living in the shadows of Africa for centuries. Occasionally called upon, she would contract missions with the few who dared to meet her. The goal of these missions was always the same…protracted misery and death.  The Bruja’s tools were rooted with the magic of the dark spirits, and it was they who generated her fearsome abilities.

Dr. Mark Michaelson was an American physician who dedicated a considerable amount of his time volunteering in a clinic in sub-Saharan Africa.  The charismatic young physician had, despite is good intentions, made an enemy of a ruthless man whose rage propelled him to take an unspeakable step beyond the pale of natural life…he made a deal with the Bruja.  Although he was soon dead, the man’s bargain stood, and the Bruja set about forming a plan to destroy Mark in a manner fitting her taste.

Jesse Varet was a nurse in a little New England Hospital.  She was also Dr. Michaelson’s fiancée.  Young, beautiful and competent Jesse held the respect of those with whom she worked; and she had the deep love of Mark.

The ayudantes were a small brood spawned by the Bruja.  She cared for them and loved them in her own way. She killed the weak ones and groomed the strong ones, gradually nurturing their dark powers so that they could better serve her.  They were her family; they were her guardians and they were her slaves.  Small at first they hunted as a pack, doing the Bruja’s bidding.  Where they went, death swept in like the cold deep indigo that covers the land when clouds sweep away the full moon. They grew in stature, and their powers burgeoned, but so did their self awareness.

The components of the struggle lock in place.  Overpowered by what they don’t understand, Jesse, Mark, Mark’s assistant and a medical resident find themselves forced to accept things they would have scoffed at before their lives were changed.  Their intellects are their weapons, but their doubts undermine them.  Not understanding what it is that is threatening them terrifies them, but they stand their ground partly because of their nature and partly because there is no sure escape.  The struggle evolves, moving to North America and then back to Africa. Yet Mark and his small group are not without allies. There are people and forces of magic that want to help them and the battle intensifies and casualties burgeon.

As their experience increases their understanding grows and Mark and Jesse become more fit adversaries to the malevolence that stalks them .  This draws the Bruja more directly into the fray, and with this comes an even greater threat to her victims, but it is not without greater risk to the Bruja herself. Her tenebrous powers do not give her invulnerability. The struggle intensifies. They become engaged in a dance of wills, spinning and turning towards a crescendo the end of which will bring resolution, but the nature of that resolution…that is not at all clear.

While the Bruja stalks Mark and Jesse, they, in turn, hunt her.  They discover a vulnerability and exploit the very magic that surounds her.  A fierce struggle ensues and the Bruja is brought down.

With the Bruja dead Jesse and Mark go on with their lives.  This is briefly described as a dénouement. They marry and Mark continues to work part time in his clinic in Africa. All goes well until his plane crashes. Jesse sinks into depression at his apparent death until one night she sees Mark. He survived, but something is seriously awry. The Bruja had passed on some of her dark traits to him, and all is most definitely not well. At this point the story concludes, and while the ending is clean it is set up for a sequel which is now beginning to be prepared.

The story takes place in medical settings both in the United States and Africa. While the story is, of course, fiction the descriptions of medical practices and of places and customs are authentically created based on my personal experiences as a physician in both America and in sub-Saharan Africa.  There is a great belief in magic in sub-Saharan Africa.  People hold to those beliefs not as legends, metaphors or childrens’ tales, but as literal realities of nature. The belief in magic, to them, is a subjective reality, and I have tried to realistically convey that to the reader.

The author is a physician certified in internal medicine and nephrology.  He is the founder of WORTH (World Organization of Renal Therapies), a non-profit organization that places dialysis units in the third world and is dedicated to treating the poor, and in so doing he has  spent extensive amounts of time in sub-Saharan Africa. I am well versed in medicine and the cultures of sub-Saharan Africa both qualities of which give validity to the work I would like to submit.  I have published widely in the scientific literature and have written another novel (Source of Shade) which was accepted and published in 2006.   I have diversified interests that I think help in my creativity.  These include karate (I have a second degree black belt), a propensity for pencil sketch portraiture, sculpting, sailing and in line skating.

Get your copy of what makes for a compelling read:-

A NEW NOVEL BY THE AUTHOR TITLED “PRIMEVAL SEED” 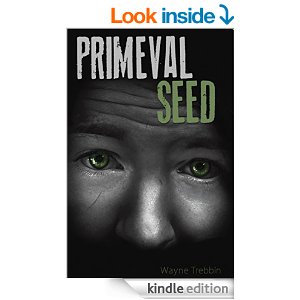 Be the first to review this item
Kindle Price: $3.45 includes free international wireless delivery via Amazon Whispernet
Length: 266 pages
Don’t have a Kindle? Get your Kindle here.

Janis Michaels is training to be a cardiologist. Brilliant, beautiful and ambitious she is on her way to a stellar career. However, unknown to her, the destiny she envisions is not at all secure at this point. Her world is about to be entered by something ancient; an unparalleled predator so skilled that it has given rise to legends that go back for centuries. The creature is intelligent, with vast experience and talents that make it nearly invulnerable. Janis is young, modern, scientific and evidence based in her approach to problem solving. This is a great advantage in the care of her patients; but it may make her too slow in accepting the threat coming toward her. She will need to think and adapt in ways few have ever had to. Legend and science will clash in a dance of death as each encounters the other and reacts to survive.

Wayne Trebbin is a physician who practices nephrology on the North Shore of Boston in Massachusetts. He is also the founder and president on The World Organization of Renal Therapies (WORTH), a non-profit charitable organization that builds self-sustaining dialysis units for the poor in the developing world. Besides Primeval Origins he is the author of the medical thriller Bruja, where he draws upon his medical experiences in Africa. Other works will be coming out in the future. He has climbed Mt. Kilimanjaro and enjoys sailing, karate and pencil sketching.

Two great novels which ideally lend themselves to the medical thriller category for movie material, which are not too common right now where movie preferences go…so high time for a change.   More novels planned and being worked on as I speak.