Our Client, and Author Edward Hughes

Edward Hughes, born in Massachusetts in 1967, has always possessed a keen interest in writing. That interest continued to grow throughout his years of education and is now a permanent fixture in his life. Starting with a passion for poetry and essay contests, Edward has studied the craft over the years, attending Hartnell Community College in California and Lane Community College in Oregon, to polish those skills and become a professional writer. Hughes’ favorite genre of film has always been Westerns, and like many others he was a huge fan of John Wayne. It was only a matter of time before Edward decided to combine his love of Westerns and writing into a single effort. When the Dust Settles is one result of that effort.

ABOUT – “WHEN THE DUST SETTLES” 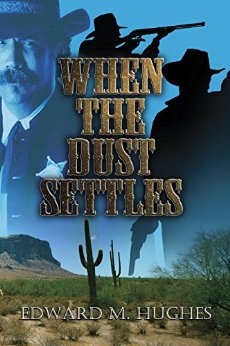 Jake Brennen was living a life many would be proud of. He was a town Marshall in a peaceful community, and was married to the prettiest woman he had ever seen. Unexpectedly, events began to transpire that would change his life forever. He was arrested, tried, and convicted for a murder he didn’t commit, and sentenced to life in the Nevada Territorial Prison.
Jake knew that if he stayed in prison, where the other prisoners were trying to kill him, he would never find the murderer and clear his name. His only hope was to find a way to escape. After months of searching for the opportunity to leave this nightmare behind, he found a way out.
After his daring escape, he was blindsided by mishaps and obstacles, all the while being a hunted man having to dodge bounty hunters and lawmen. Will he clear his name before they close in on him? Find out When the Dust Settles.

Comments Off on Our Client, and Author Edward Hughes