About Our Clients and Authors Undine Celeste and Donna Giancola 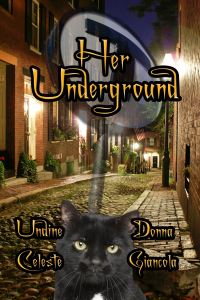 SYNOPSIS:
“HER UNDERGROUND”
Co-Authored by Undine Celeste and Donna Giancola

Genre:      Feminist Adult Fiction/Mystery/AdventureThe combined efforts in the creation of  ‘Her Underground’ by Donna Giancola and Undine Celeste  respectively, is set in the city of Boston where the Big Dig public roads work project unearths an ancient stone chamber deep below the city. Just as the highway twists and turns, so goes the story. Our mystery involves top Harvard anthropologist Richard Lyons, law professor Alexandra Martin, her lesbian friend Diana Wolfe, and Richard’s arch nemesis, crone archaeologist Moira Fennessey.When Richard and Alex are called by the Mayor’s office to consult for the city, Alex discovers that the Big Dig has ruptured one of the Earth’s sacred energy centers. Moira knows Richard has sabotaged these sacred places in the past for his own glory. Boston politics, secret ancient goddess myths and philosophies, along with mother Earth’s wisdom all push and pull on the underground chamber and our characters. Will the Earth be allowed to reveal the truth of cultures past or will her consciousness be lost?
CRITIQUE:
Dr. Mary Daly, a leading feminist author, philosopher and women’s rights advocate gave Her Underground high praise and support, saying: “I have been stunned; I’m very excited about it, it is real! Her Underground is there, …it’s HERE!!!!” We believe that this work will appeal to a vast segment of the feminist/women’s market. This book may be fiction but the Big Dig and its effects are real. Recently a 2000 word excerpt was published in “Sinister Wisdom,” (Issue 75; winter 2008-2009 95,000 words in final draft.
BACKGROUND BEHIND THE CREATIVE CONTENT
The idea for this book came about as a result of each author’s possessive life work, expertise and passions.

Dr. Donna M. Giancola is a tenured Associate Professor of Philosophy and Director of Religious Studies at Suffolk University in Boston. She has published a book on World Ethics with Wadsworth Publishing (2003), as well as numerous articles in academic journals. She lectures internationally on issues pertaining to ancient goddess traditions, feminist philosophy and ancient philosophy.

Undine Pawtrowski – Is a Lawyer/Civic Leader& Public Speaker and Freelance Artist.   Undine  has extensive experience in public speaking, advocacy and environmental protection policies in St. Augustine, FL where she serves on this city’s Planning and Zoning Board.